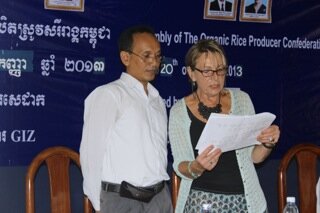 Phnom Penh, Cambodia - As organic rice production continues to expand in Cambodia, the Cambodian Center for Study and Development in Agriculture(CEDAC) and GIZ are working to ensure that farmers are properly supported to reap the benefits of organic agriculture. To this end, the Second General Assembly of the National Organic Rice Producer Confederation in Cambodia was held on September 19-20, 2013 at CEDAC’s head office in Phnom Penh. Over 50 rice farming community representatives participated in the meeting. Mr. Keam Makarady, CEDAC Director of Health and Environment and Mr. Claudius Bredehoeft, National Project Coordinator for GIZ ASEAN Biocontrol (ABC) for Sustainable Agrifood Systems facilitated the meeting. 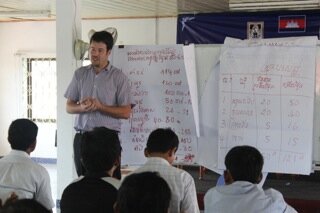 Dr. Ludgera Klemp, Counsellor and Head of Cooperation at the German Embassy delivered the Opening Remarks in Khmer. She spoke about the German government’s long support for CEDAC, saying “it’s a pleasure to look back on the established cooperation with CEDAC since 2003 and the progress made through technical support for organic agriculture and market development for farmers since then.”

The assembly’s primary objective was to generate the 2013-2014 organic rice production plan. But according to Mr. Bredehoeft: “This meeting is also about sharing knowledge about the situation in the fields, in the market, and this year’s rice production.” In addition to reviewing the numbers of organic farmers, respective yields and the Fair Trade premium available to certified groups, participants were encouraged to discuss their successes and challenges. “It is very important that we learn from each other,” Mr. Bredehoeft stressed. 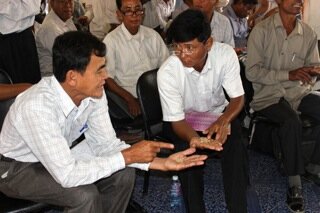 Other presenters included CEDAC President, Dr. Yang Saing Koma and Mr. Sou Savorn, CEDAC Sahakreas Operations Manager. Dr. Koma gave an overview of the essential System of Rice Intensification practices as well as the Fair Trade and organic certification processes, explaining how the farmers can benefit from this linked system.