Access to legal knowledge granted through GIZ and CIM support 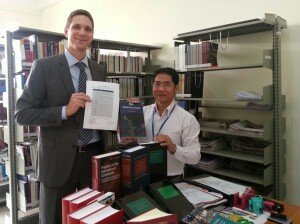 Phnom Penh, Cambodia – Knowledge is key to the beholder.  In Cambodia, access to knowledge is often weak and resources are limited, constraining professionals and researchers alike. Contemporary libraries are also hungry for resources to supply their readership demands.

In December 2012, GIZ in collaboration with CIM Legal Adviser to the Extraordinary Chambers in the Courts of Cambodia (ECCC), Mr. Simon Meisenberg organized a donation of legal textbooks on international criminal law. The donation totaled to over USD 3,000 in worth, was then handed over to the ECCC Library.

With access to resources, knowledge management also becomes a priority. To address this need, support was provided for a German expert and two Cambodian consultants to assist with the establishment of an on-site, open-source search engine in both English and Khmer languages. This work contributes to the Virtual Tribunal Project of the ECCC, an internet based open media library providing information about the work of the Tribunal.

The German Government’s  support to the ECCC is long running and continues to provide financial contributions to the core tribunal budget. To date, more than USD 11 million has supported various projects of the ECCC.

Plans mapped to improve health and well-being of all Cambodians – USD 2.7 million committed for 2013 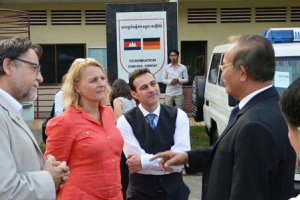 Phnom Penh, Cambodia – Last month, the GIZ Social Health Protection Project and the GIZ Rights–based Family Planning and Maternal Health Project invited key partners for a consolidated planning workshop that would explore ways forward to improve health and social health protection for Cambodians and in particular for the poor and vulnerable. Dr. Sok Kanha, representative of Cambodia’s Ministry of Health opened the workshop. Over 65 participants attended as improving health care is a goal that cuts across sectors.

The results of joint planning processes on provincial and operational district level were presented and consolidated with the national annual operational plans.  It was agreed that the German Technical Cooperation will support activities in 2013 up to USD2.7 million under the joint Cambodian-German Social Health Protection Programme (SHPP).

Dr. Bernd Schramm, the SHP Project Manager noted that, ‘the significant increase in technical support reflects the appreciation of GIZ’s support,  the excellent cooperation between all partners involved in the Social Health Protection Programme, as well as the German Government’s commitment to Cambodia’s Health Sector.’

Dr. Schramm mentioned that this, ‘also includes additional funding for maternal health and vulnerable groups, such as people with disabilities and the elderly.’ 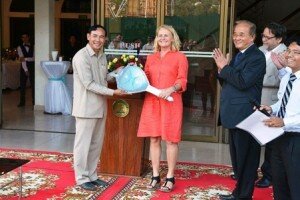 Emergency response on road to improvement with new ambulances

Directly after the workshop, GIZ invited all participants to a hand- over ceremony of four ambulances and one minibus at the National Institute of Public Health. H.E. Prof. Eng Huot, Secretary of State of the Ministry of Health, and Dr. Petra Schill, Acting Country Director of GIZ Cambodia presided over the ceremony.

As Dr. Schill mentioned in her welcome remarks, ‘this special support for ambulances and medical equipment is an important contribution to strengthen the referral system in the health sector’.

‘It ensures that patients can be quickly and safely transferred to the next and most appropriate health facility in the provinces of Kampot, Kampong Thom and Kampong Speu,’ she added. 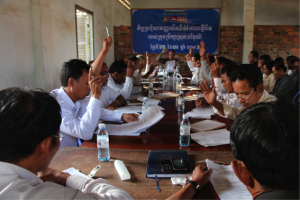 Phnom Penh, Cambodia – With a series of Technical Documents, the National Committee for Sub-National DemocraticDevelopment (NCDD) aims to support the Councilors of Capital, Provinces, Municipalities, Districts and Khans to fulfill their roles and responsibilities. Once finalized, the Technical Documents will constitute a “Handbook for Councils”. Recently, the Chairman of the NCDD approved the first two chapters. In two provinces, launching ceremonies marked the achievements of the contributingcouncils and the chapters’ handover.

During the last year, NCDD-S developed the handbook’s first two Technical Documents for sub-national Councils with technical support of the EU Program for Strengthening Performance, Accountability and Civic Engagement (EU SPACE). These documents provide orientation on how to conduct more effective council meetings as well as dissemination and consultative forums. During the 2-3 month modeling period, the target councils of the EU SPACE Program in the provinces of Battambang and Kampong Chhnang put the documents to the test. Councils tested their own comprehension of the documents and the degree in which they help them achieve their new roles and responsibilities.

During the launching ceremony, Mr. Sok Sothy, Deputy Head of the NCDD-S Policy Division, expressed his appreciation for the efforts and contributions of NCDD-S officials and the EU-SPACE Program. Mr. Sothy especially thanked the target councils for their contributions to the development and modeling of the documents. The councilors’ meaningful involvement helped to field-test their usefulness and improve document quality.

Mr. Gereon Kaus, EU SPACE Strengthening Councils Advisor, stressed the importance of developing  sub-national council capacities, and welcomed the recent approval of both Technical Documents by Deputy Prime Minister, His Excellency Sar Kheng. He expressed his hope that the documents will help the councils to improve the efficiency of their monthly council meetings and support them to be well-prepared for organizing dissemination and consultative fora.

Rolling out the coaching approach – countrywide

NCDD-S is currently rolling out the coaching approach that was successfully tested with EU SPACE support in two target provinces.

The ceremonies marked a milestone in the efforts of NCDD-S to support the capacity development of sub-national councils. A slightly re-formatted version of the modeled Technical Documents is expected to be made available and disseminated country-wide to all councils in the upcoming months. Meanwhile, two new Technical Documents are currently being developed and will be modeled in the target councils.