The end of the two-day International Summer School in Phnom Penh welcomed many satisfied faces, and all voiced positive feedback.

This year’s Summer School was chaired by H.E. Im Chhun Lim, Senior Minister of Land Management, Urban Planning and Construction.  It focused on the topic, “Strategic Spatial Planning: Responding to Territorial Development Challenges in Rural Areas”. About 22 high quality speeches and presentations of national and international experts from Lao PDR, the Philippines, the Socialist Republic of Vietnam and Germany provided a strong foundation for further discussions with panelists and the audience. 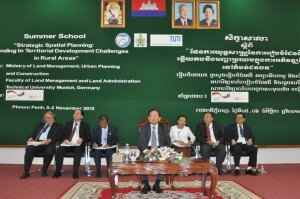 Discussions touched upon some of the most important topics for developing and emerging countries: How to mitigate the rural-urban migration? How to avoid the rural exodus? How to strengthen rural areas in terms of social and physical needs of the population? How to create jobs in rural areas and transform dormant rural towns to lively rural centers?  And, what role does comprehensive spatial planning play to respond to these various challenges mentioned above?

In order to respond to these challenges, participatory planning activities are of utmost importance. However, coordination, cooperation and communication among all stakeholders are necessary preconditions. The role of all stakeholders must be clarified and they should actively take part and contribute to the common objective. In his summary, Prof. EoE Holger Magel remarked, “It’s all about People and Land!”

The Summer School was attended by more than 150 persons from national and sub- national government institutions, international experts, NGOs, students and representatives of the private sector.

The benefits of looking beyond borders 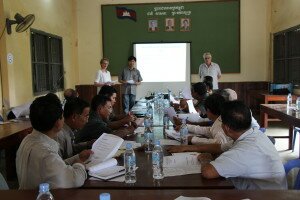 Marion Kütemeyer and Christian Weiser – assisted by an interpreter – discussing the role of city councils in local economic development with members of the Sangke District Council.

It was Christian Weiser’s third time to travel to Cambodia, and this time Marion Kütemeyer accompanied him. In 2011, the EU SPACE programme of the National Committee for Democratic Development (NCDD) suggested, for the first time, inviting members of city councils from Germany to promote experience sharing, to improve mutual understanding of local self-governance, and to strengthen the roles and responsibilities of Cambodian councils..

They came to Cambodia at the request of the Secretariat of the NCDD, bringing along their experience as members of the council of the German city of Eppstein. Their mission: Eight dialogue forums with district, municipality and provincial councils from the provinces of Battambang and Kampong Chhnang as well as a national workshop attended by around 400 participants. This year’s topic: promotion of local and regional development.

The starting point, however could not have been more dissimilar: in Germany, there is a long tradition of local self-governance, and the councils of cities and districts elected by the people are largely responsible for the development of their localities. They are responsible for energy supply and trash collection, for urban planning, schools and the promotion of local development, just to list a few examples. In Cambodia, commune councils were elected for the first time in 2002 and district, municipality and provincial councils were established in 2009. The scope of their activities is limited, since most responsibilities are still under the purview of the central ministries. 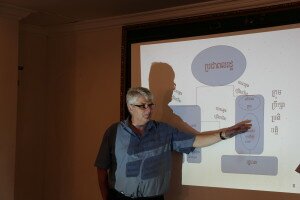 Christian Weiser explaining the relationship of sub-national councils and administration in Germany at a meeting with the Battambang Municipal Council.

Nevertheless, the NCDD-S believes that the Cambodian councils can and should begin to develop an initiative, particularly in the area of local and regional economic development. During the national workshop the Regional Economic Development Program of GIZ (RED) showed with examples from Siem Reap, how such an initiative could work. Councils could, for example, create a profile of their district or municipality, identifying economic strengths and weaknesses. They could also invite representatives of the private sector to advise on potential improvements, and they could link experienced business people with younger less experienced ones in order to facilitate their entry into the business community.

In order to ensure that the sharing of experiences with the two members of the Eppstein city council and the RED presentation would not be one-off exercises, the NCDD-S recommended developing a handbook for the councils on the promotion of local economic development. The handbook should be created with support from EU-SPACE and the RED programme and disseminated to councils in the first half of 2014.

Apropos sharing of experiences: the Cambodian councillors were surprised that the two visitors from Eppstein city council belong to different political parties. Christian Weiser is a member of the ruling Christian Democratic Union (CDU), while Marion Kütemeyer is a member of the opposition Social Democratic Party (SPD). Even during the forums in Battambang and Kampong Chhnang provinces, they made no secret of their frequent differences of opinion. They were playful and quick-witted as they parried the arguments of their respective “opponents”, much to the amusement of their Cambodian audience. This exchange not only provided an important contribution to the promotion of local development, but also to improving the political culture.

The EU-SPACE programme receives funding from the European Union and the governments of Germany (through BMZ) and Sweden (through Sida). It is implemented by GIZ as a component of the German-assisted “Decentralisation and Administrative Reform Programme” (ARDP).