Towards Inclusive Health Services in Cambodia – A Promising Approach 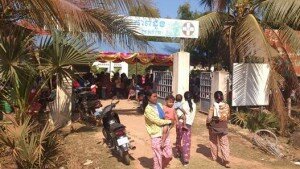 More than one billion people across the world live with some form of disability, a large major­ity of whom live in developing countries. Pov­erty and disability are often interrelated. The United Nations Convention on the Rights of Persons with Disabilities (CRPD) represented a major step towards making disability a human rights issue, and became an important frame­work for disability-inclusive development coop­eration. The CRPD, ratified by Germany in 2009, encouraged and influenced development cooperation partners in their efforts to ensure greater inclusion of persons with disabilities in programmes and policies. Following its ratifica­tion, Germany developed a National Action Plan on the Inclusion of Persons with Disabilities and the Federal Ministry for Economic Coop­eration and Development (BMZ) elaborated its own Action Plan for the Inclusion of Persons with Disabilities (2013), which aimed to ensure systematic mainstreaming of the inclusion of persons with disabilities in German develop­ment policy. It outlined several strategic objec­tives and measures to be incorporated into de­velopment cooperation. One measure is the in­clusion of persons with disabilities within the health sector in Cambodia, building on the ex­isting partnership with the Cambodian Govern­ment in this area.

Cambodia ratified the Convention in 2012, committing itself to promoting the equality of persons with disabilities in all spheres of soci­ety. In 2011, the Royal Government of Cambo­dia and the German Government agreed dur­ing its cooperation meetings to develop ideas about how to mainstream the inclusion of per­sons with disabilities in current and future co­operation activities to ensure that one of the most vulnerable groups of Cambodian society could increasingly participate in and benefit from poverty reduction programmes and devel­opment initiatives. Based on this decision, Ger­many provided additional resources for the pri­ority area Health (Social Health Protection Pro­gramme) of Cambodian-German bilateral de­velopment cooperation. They were allocated in June 2012 to the Technical Cooperation (TC) project implemented by the Deutsche Ge­sellschaft für Internationale Zusammenarbeit (GIZ), operating on behalf of BMZ to enhance the inclusion of persons with or vulnerable to disabilities.

With this article, the authors aim to show how the political commitment to include per­sons with disabilities and other groups such as older persons has been translated into practice in the Cambodian health sector. Based on the