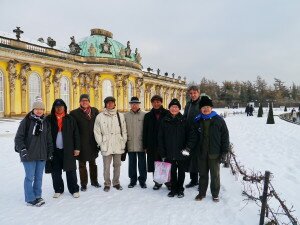 Berlin, Germany – Understanding human rights policy and implementation is a life-long activity, even for senior officials. Last month, two Cambodian Senators and three Members of the National Assembly, went on a study trip to Berlin to learn about Human Rights policies and implementation in Germany. The visit served to further strengthen the capacities of the Human Rights Commissions of both houses of the Cambodian Parliament. Organized by CIM Advisors working with the National Assembly respectively the Senate, the event was kindly supported by GIZ.

The Cambodian delegation took advantage of every moment in Berlin: they met with members of various Bundestag committees, including the Committee on Human Rights and Humanitarian Aid and the Complaints Committee, and a a number of other institutions relevant in the area of Human Rights and International Cooperation.

Transparency and its relevance in the context of a sound anti-corruption policy was discussed at the global headquarters of Transparency International. The Federal Commissioner for Data Protection and Freedom of Information shared his insights on the implementation of a regime of free access to public information, which is an important aspect of good governance and democracy.

A further focus was on workers’ rights. The NGO Clean Clothes Campaign presented their activities that strive to raise awareness amongst consumers in western countries of garment factory workers’ precarious working conditions in Cambodia. The issue of workers’ rights was revisited during a meeting with the DGB, Germany’s umbrella organization for trade unions.

The visit was completed by a trip to Sanssouci Palace in Potsdam, commemorating the period of enlightenment and how it influenced a great leader, King Frederic of Prussia.