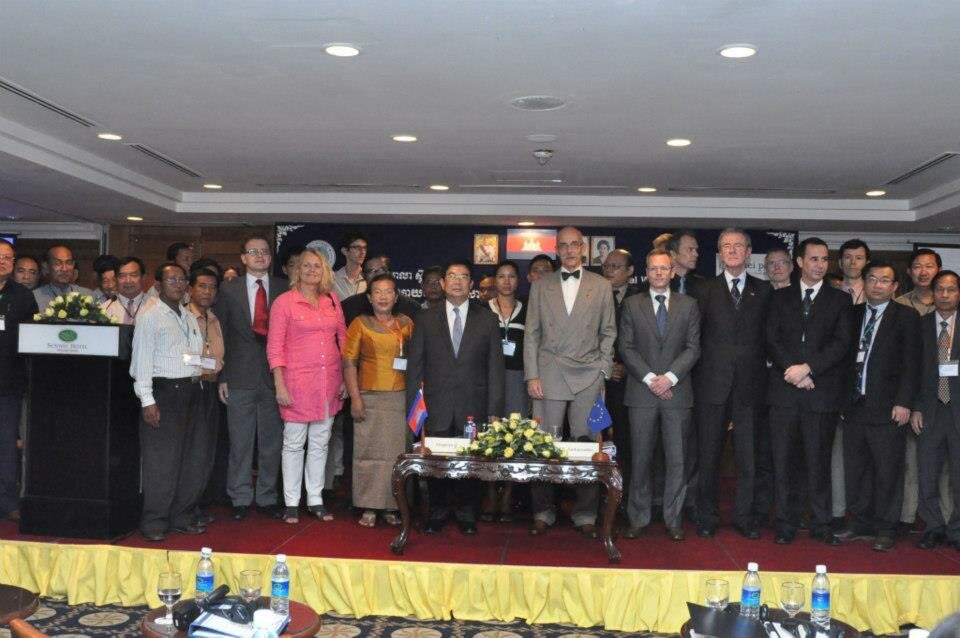 The EU Energy Initiative Partnership Dialogue Facility (EUEI PDF) is currently assisting the Ministry of Industry, Mines and Energy (MIME) in the development of a National Energy Efficiency Policy, Strategy and Action Plan that seeks to contribute in a cost-efficient manner to increase Cambodia’s energy security.

The EUEI PDF is a multi-donor-funded instrument of currently six EU member states and the European Commission, which operates globally.  The Project Management Unit of the EUEI PDF is hosted by the Deutsche Gesellschaft für Internationale Zusammenarbeit (GIZ).

As part of the development of Cambodia’s National Energy Efficiency Policy, Strategy and Action Plan, the EUEI PDF, with support by GIZ Cambodia, organized the final workshop of its activity with MIME on 29-April 2013, which was launched by His Excellency Suy Sem, Minister of Industry, Mines and Energy. 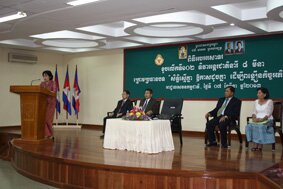 Phnom Penh, Cambodia In commemoration of the 102nd Anniversary of International Women’s Day, the National Audit Authority (NAA) organized an event around this year’s theme: “Equal Rights, Equal Opportunity to Accelerate Progress”. Her Excellency Som Kimsuor, Auditor General of the NAA, presided over the event while 59 women from the NAA and the GIZ project to support the NAA joined the event as well.

Ms. Kuoy Lang, representative of the women of NAA, conveyed the message from Her Majesty Queen Mother Norodom Monineath Sihanouk. This year, messages focused on improving technical knowledge of women to strengthen their rights and improve career opportunities. Ms. Kuoy Lang also summarized the activities and outcomes of women’s work inside the NAA. 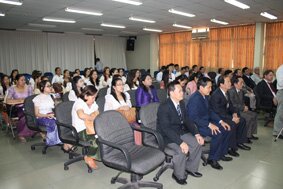 The 1993 Constitution states “Men and women have equal rights before the law and enjoy equal participation in political, economic, social and cultural life. This includes equality in marriage and family; employment; and equal pay. It also includes measures to prevent and eliminate of all forms of discrimination and exploitation of women.”

Additionally, the National Strategic Development Plan and the Cambodia Millennium Development Goals (MDGs) highlight the Government’s commitment to reduce gender disparities in all development sectors; the need to put in place effective measures to remove barriers that women face; and to increase opportunities for women to fully participate and benefit from development.

Precisely, GIZ also applies a gender mainstreaming strategy to help anchor the gender aspects of its work. This involves managing the development, and evaluation of decision-making processes and measures from a gender perspective while also measuring the impact of interventions on the lives of both women and men. 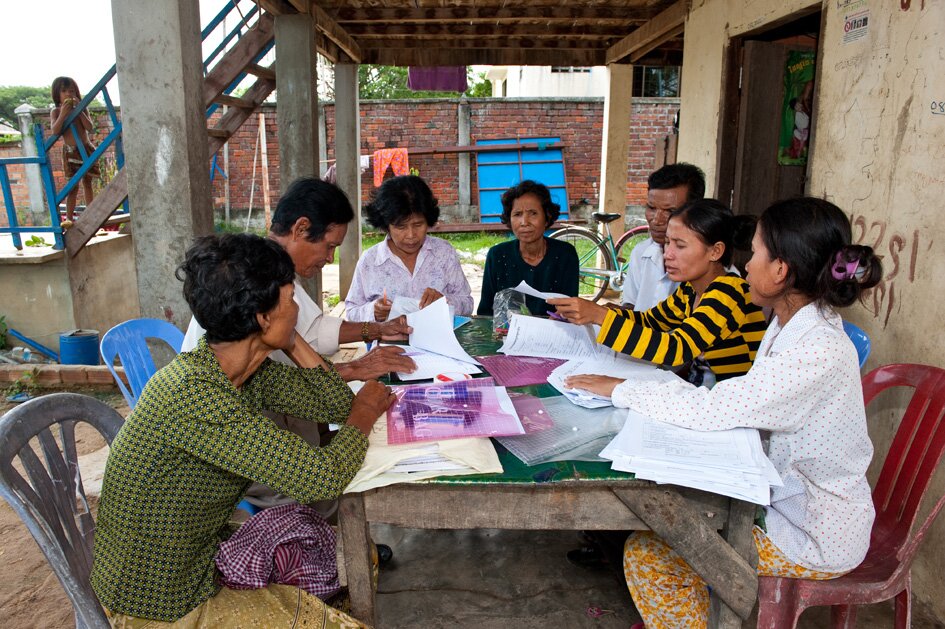 Cambodia - With support from GIZ, the Ministry of Planning and Provincial Departments of Planning have successfully completed “Round 6” of identifying poor households (“IDPoor”).

Village meetings and household interviews took place in all rural areas of seven provinces including Kampong Cham, Kampong Thom, Siem Reap, Beantey Meanchey, Kratie, Oddar Meanchey, Stung Treng and the capital, Phnom Penh. Up-to-date lists of poor households are now available for these areas, covering a total of 4,821 rural villages. With support from GIZ, the data will now be entered into the IDPoor database.

Households identified as poor during the IDPoor process will receive so-called “Equity Cards” from the Ministry of Planning. The cards will enable them to qualify for and access a range of services and receive support from various poverty reduction programmes.

GIZ advises the Ministry of Planning and Provincial Departments of Planning in all steps of the IDPoor implementation process and supports relevant capacity development measures; this support is funded by the German Federal Ministry for Economic Cooperation and Development (BMZ) and Australian Aid.

For further information on the IDPoor Programme please visit: http://www.mop.gov.kh/Projects/IDPoor/tabid/154/Default.aspx 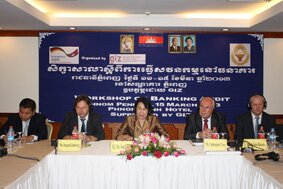 Phnom Penh, Cambodia – On-the-job training is known to be an effective approach to putting technical skills into practice. By adopting this approach, GIZ’s National Audit Authority Programme helps Cambodia’s National Audit Authority (NAA) strengthen its capacity and team skills of auditors in charge of auditing at the Central Bank. Auditors at the Central Bank are mainly responsible for monetary policy and bank supervision of the Kingdom of Cambodia.

Development of Audit Guidelines listed as, ‘an urgent task’

Momentarily, the NAA is working to urgently finalize the (draft) Audit Guideline for the Central Bank. At the same time, staff training is underway with the aim to raise the quality of independent audits.

In 2008, NAA initiated an audit at the Central Bank and Parliament discussed its audit findings in 2012. In coming years, NAA Central Bank audits are planned to continue. Guidelines would aid this process, and provide a foundation for auditors to work from.

Her Excellency, Auditor General Som Kimsuor, recently established a new Working Group to conduct audits at the Central Bank to aid the process. However, as audit topics have evolved from previous ones, the newly established Working Group is anticipated to face some difficulties.

To overcome their challenges, GIZ’s NAA Programme engaged a German audit specialist, Dr. Uwe Roger Schreiner, to facilitate hands-on training for the audit team responsible for the Central Bank audit. The objectives of the training that took place on 11-15 March 2013, included:

2)     Training the Working Group on the audit process – from planning to reporting – at the Central Bank by providing some best practice examples from the German Bundesbank; and

3)     Drafting the Audit Programme for the audit at the Central Bank.

The result of this work will be discussed with the Working Group and included in the Audit Guideline. 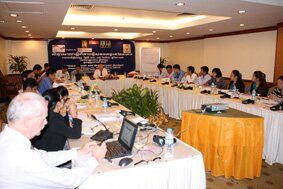 As a result from the training, the Audit Guideline on the Central Bank will be restructured to comply with the general standards of the INTOSAI. The Working Group will continue to refine the Guideline’s content and will submit the final product to the Auditor General for approval. Training participants have not only developed their professional capacity and technical knowledge through these trainings, they also feel more confident to conduct the audit at the Central Bank.

It is a challenging task for NAA to perform an audit on a specialized institution, such as the Central Bank.  The Guideline was developed to aid this process. As the Guideline is a ‘living document’, its drafting is just the beginning a longer process ahead. To ensure its effectiveness, the Guideline must be tested and regularly updated to reflect changes in the Central Bank, and assist with the development of new audit methodology.

“Epic Arts opens our eyes to our common humanity so that all of us can flourish.”

Kampot Province, Cambodia – Artistic expression is a common human characteristic, unlocking creative potential and defying borders. Epic Arts, a disability-arts NGO (http://www.epicarts.org.uk), works towards equality by reaching out to people with physical and learning disabilities and provides deaf education and education for children with learning disabilities as well as vocational training in Kampot Province, Cambodia. Through art, Epic Arts seeks to live out the values of inclusion, understanding, justice and equality.

The organization celebrates the richness of diversity through dance and theatre performances and creative workshops. Additionally, it runs a café, selling handicrafts produced by people with impairments. The café not only offers employment to the disabled, but also acts as a social hub for people with disabilities. 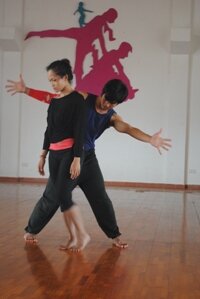 Students of the Women’s Media Centre produced a short documentary on the work of Epic Arts with support from the DW Academy (http://blogs.dw-akademie.de/asia/2013/01/09/reporting-about-people-with-disabilities/) and the GIZ Social Health Protection Project.

On behalf of the German Federal Ministry of Economic Cooperation and Development, GIZ supports the Royal Government of Cambodia in disability inclusion in the development process. With the government’s ratification of the UN Convention on the Rights of Persons with Disabilities, disability inclusion assumes a more prominent role in development cooperation programmes, to ensure that the most vulnerable groups in society benefit from poverty reduction and development. To promote the inclusion of people with or vulnerable to disabilities the GIZ’s Social Health Protection Project deploys a mainstreaming approach in all its areas of intervention and supports selected, targeted activities in close collaboration with Handicap International Cambodia and other organisations representing people with disabilities, such as Epic Arts. 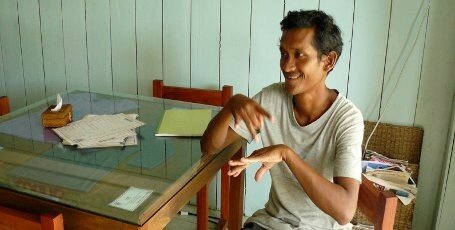 The GIZ Social Health Protection Project will further cooperate with Epic Arts in awareness rising activities and advocating for inclusive health services in the province of Kampot, one of the project’s target-areas.  GIZ Social Health Protection Project seeks to involve people with disabilities and civil society as much as possible in local processes of health sector development and to complement existing efforts.