Leave no one behind: Opening of the 5th Roundtable for inclusion 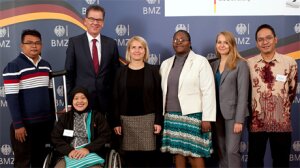 On November 11, the 5th round table on the inclusion of persons with disabilities in German Development Cooperation’ took place. Dr. Gerd Müller, Federal Minister of Economic Cooperation and Development, opened the meeting and put emphasis on the importance of the issue.  He stressed inclusion as a shared responsibility and genuine participation as an opportunity for all of us – they are quality characteristics of the German Development Cooperation. Country representatives from Cambodia, Zimbabwe and Indonesia were invited to lead three thematic working groups. The GIZ Social Health Protection Program presented their inclusion strategy and activities for persons with disabilities in the Cambodian health and social protection sector. The round table for inclusion serves as a forum for exchange between different actors of the German Development Cooperation, working to advocate for the rights of persons with disabilities. 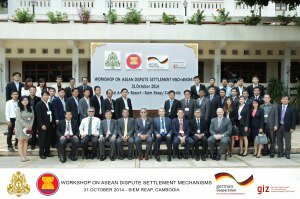 SIEM REAP, Cambodia– ASEAN is strongly committed to establishing dispute settlement mechanisms in all fields of cooperation, said the Deputy Secretary-General of ASEAN for Community and Corporate Affairs, H.E. AKP Mochtan, in his opening remarks at a workshop to familiarize stakeholders with ASEAN Dispute Settlement Mechanisms (DSM) held in Siem Reap, Cambodia last week. “DSM is a key component in the realisation of a rules-based community, where the rule of law is strengthened and disputes are resolved through peaceful means with legal certainty and predictability,” DSG Mochtan told the participants.

According to DSG Mochtan, the successful conclusion of the Protocol to the ASEAN Charter on Dispute Settlement Mechanism in 2010 has shown ASEAN’s strong commitment to realise the ASEAN Charter’s objective of creating dispute settlement mechanisms in all fields of ASEAN cooperation. “This Protocol to the ASEAN Charter, together with the existing Treaty of Amity and Cooperation in Southeast Asia and the Protocol on Enhanced Dispute Settlement Mechanism (EDSM), is a significant achievement in establishing reliable and trustworthy dispute settlement mechanisms,” he added.

In his remarks, H.E. Dr. SOK Siphana, Advisor to the Royal Government of Cambodia and Chairman of Board of Directors of the Cambodian Development Research Institute stated that “I believe that workshop would provide an excellent opportunity for all participants to obtain new knowledge and best lessons-learned with regard to the ASEAN disputes settlement mechanisms to better prepare themselves for the arrival of the ASEAN Community in 2015, which is only one year ahead and beyond.” 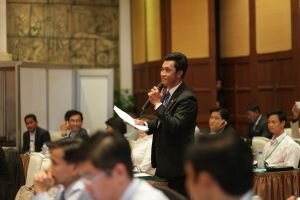 a forum for participants to exchange views and ideas with speakers and experts on ensuring the effectiveness of these mechanisms within both national and regional contexts. There was also a panel discussion that focused on challenges and next steps on the ASEAN Protocol on EDSM.

The press release was prepared by the ASEAN Secretariat.