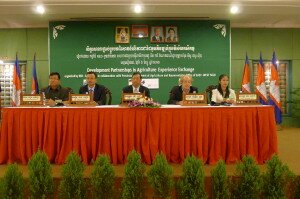 Opening ceremony of the workshop, Development Partnerships in Agriculture: Experience Exchange, organized by the RED-Green Belt programme of GIZ in collaboration with Provincial Department of Agriculture and the representative office of East West Seed International Ltd

SIEM REAP – On 6 December 2013, a workshop on development partnerships was held in Siem Reap. The event was facilitated by GIZ programme for Regional Economic Development (RED) – Green Belt and organised in collaboration with Provincial Department of Agriculture (PDA) and the representative office of East West Seed International Ltd. (EWS).

The event built on the experience of RED and its partners in the implementation of development partnerships in Siem Reap province since 2009. The Provincial Department of Agriculture (PDA) Siem Reap, EWS and the NGO Agricultural Development Denmark Asia (ADDA), among others, presented achievements and lessons learned from partnership initiatives that matured in the framework of RED. The representatives of Provincial Departments of Agriculture from Kampong Cham, Kampong Chnang and Kanda shared their perspectives as well.

Discussion unfolded on the challenges faced by public and private sector stakeholders and on ways forward. All participants stressed the difficulties involved in the identification of the “right” partner and advocated for a “brokering function” as RED has played in Siem Reap. Secondly, trust, transparency and clear communication procedures were identified as cornerstones of a successful partnership. Finally, participants debated on the contributions and functions that each partner should bear and expect. Lack of clarity on such matter is, in everyone’s opinion, a reason for failure. 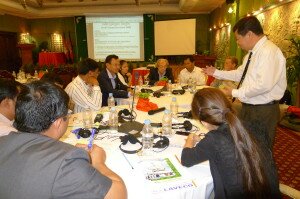 Group discussion on benefits and challenges of development partnerships. Participants discuss success factors and limitations of public-private collaboration agreements and their effectiveness as vehicles to deliver services to farmers and producers.

The need for a policy framework that enables and regulates development partnerships also led to discussion. On this matter, the representative of the Ministry of Agriculture, Forestry and Fisheries (MAFF), Dr. Mak Soeun, emphasised that partnerships with the private sector are already endorsed by government policies, while guidelines for their design and implementation still need formulation.

In conclusion, partnerships with private sector were recognised to play a significant role to promote access to know-how and innovations in agriculture, and increasingly so, as the public sector progressively embraces regulation, facilitation and coordination functions. However, challenges still lay ahead and further experience exchange will be required to establish guidelines and models that will orient development partnerships in the future.