Theater can be more than fun! 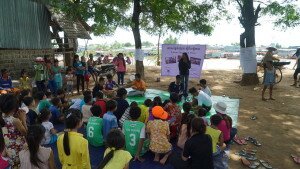 The Civil Peace Service (CPS) partner organization Khmer Community Development (KCD) runs a program that makes use of theater as a tool to transform conflict between interethnic groups in a commune inhabited by Khmer and ethnic Vietnamese in Kandal province. Applying the methodological approach of Forum Theater, which developed out of Augusto Boal’s Theater of the Oppressed, KCD particularly invites the young generation to develop their own ideas on how to find peaceful solutions to problems that arise on a day-to-day basis in an ethnically mixed commune.

On 28 August 2016, KCD conducted a Forum Theater session in Khnar Tang Yu Village. When Khmer actors with painted faces got on the improvised stage to mime a brawl between young Khmer and Vietnamese men – acting non-verbally in order to overcome language barriers – they were greeted by the giggles and laughter of up to 40 children of the ethnic Vietnamese community aged 10 to 14. But KCD junior staff, mostly originating from ethnically mixed families in the same commune, were well-prepared to catch the attention of the youngsters and draw them to the issue at hand: What would you do to change the course of the story? The children suggested that the bar owner and the police should intervene, and then they watched the actors improvise the scene with a new, non-violent outcome. One boy called for ethnic groups to live together harmoniously. The serious expression on his face seemed to indicate that he had given the issue quite some thought already. 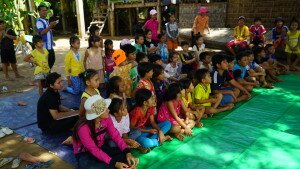 Then it was the turn of the children to think of their own experiences of conflicts between communities. Some of the children came to the stage and played Vietnamese characters having a conflict with Khmer authorities. Again the children discussed possible solutions and came up with ideas how to solve the problem in a peaceful and legal way.

By actively engaging the audience, Forum Theater is a creative approach to playfully encourage reflection on alternative outcomes to well-known problems and then trying them out in a protected environment.

Since 2014, the CPS has been supporting a number of local organizations that work on the integration of ethnic Vietnamese who have lived in Cambodia for several generations. Many were expelled by the Khmer Rouge in 1975 and experience social and economic exclusion since their return during the 1980s.  The CPS program contributes to comprehensive peace-building in Cambodia which needs to include marginalized groups and minorities, and promotes their access to development opportunities, community empowerment and conflict transformation.