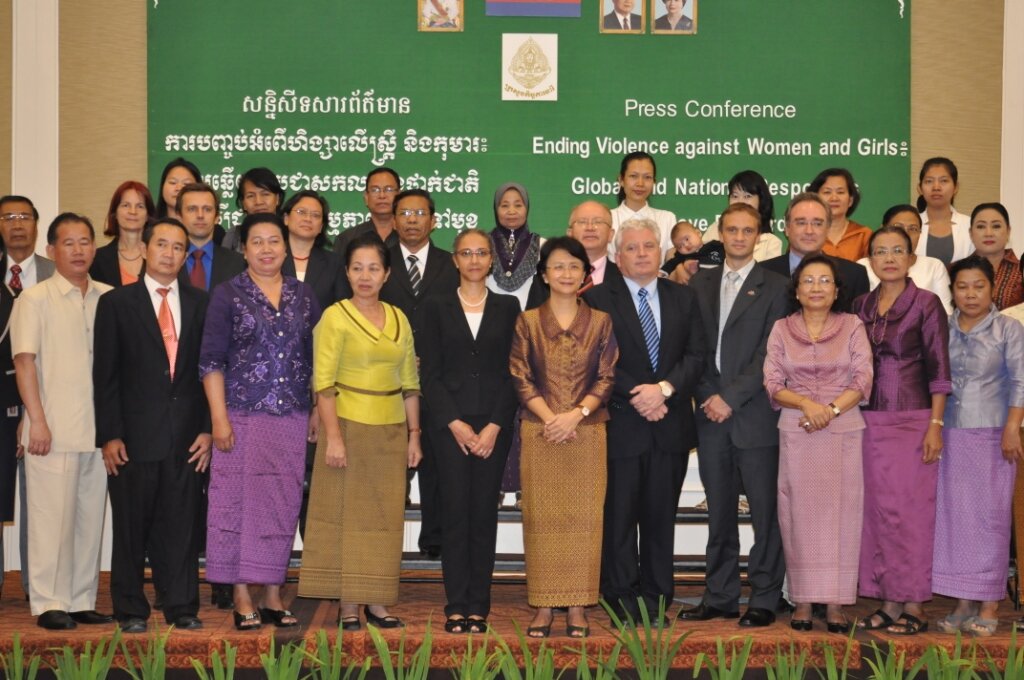 Minister of Women’s Affairs Dr. Ing Kantha Phavi and representatives from GIZ, line ministries, women’s organizations and other development partners participated on 21st May in a follow-up event on the remarkable agreement reached at the 57th Commission on the Status of Women to end violence against women and girls.

The historic 57th session of the Commission on the Status of Women produced an agreement by 123 countries that paves the way for action to prevent and end violence against women and girls worldwide. Representatives from the Royal Government of Cambodia participated in this international conference held in New York in March 2013. GIZ project ‘Access to Justice for Women’ supported Cambodian Delegation by setting up an internal process within the Ministry of Women’s Affairs to prepare inputs in a participatory manner and review progresses and challenges on the fight on violence against women and girls to be reported in the international forum.

As part of the follow-up event at Cambodian level organized on 21st May in Phnom Penh, Minister Phavi said “Cambodia will move forward with the Second National Action Plan to Prevent Violence against Women 2013-2017 in line with international standards and commitments such as the 57th Commission on the Status of Women. We will make sure that perpetrators are held accountable and that women survivors receive the necessary support. Further improvements will have to be made in critical areas, such as prevention and response to sexual violence, including rape and sexual harassment.”

In fact, the unique process to develop the Second National Action Plan to Prevent Violence against Women 2013-2017 was shown as one of the best Cambodian practices during the international conference held in New York. The referred process has involved women survivors of violence, civil society organizations –including women’s organizations-, line ministries and development partners who have participated in more than 10 consultations at national and sub-national level in the last year. This policy plan builds on the results and lessons learnt from the First Action Plan 2009-2012 and will come into force after final endorsement by the Council of Ministers of the Royal Government of Cambodia in the upcoming months.

Dr. Andreas Selmeci, Team Leader of the GIZ project ‘Access to Justice for Women’, said during event “Interventions under the umbrella of the Second National Action Plan are expected to be more human-rights and gender responsive, more socially inclusive and more empowering. In addition, actions would target women who are at higher risk of sexist violence, such as garment factory workers, sex workers, women with disabilities, women living with HIV/AIDs, women from indigenous, ethnic or religious minorities, as well as lesbian and bisexual women and transgender people.”

Mr. Paul Keogh, Counsellor Development Cooperation of the Australian Agency for International Development (AusAID), said during event “Violence against women is a significant human rights violation. It devastates lives, fractures communities and undermines good development. The Second NAPVAW is an example of the commitment and cooperation of the Royal Government of Cambodia with their partners to address this issue. Australia is very pleased to be working with Royal Government to help develop and implement this important initiative.”

Agreed conclusions of the 57th Commission on the Status of Women urge all countries to strengthen legal and policy frameworks, with important provisions on ending impunity of perpetrators, ensuring accountability and access to justice for women, as well as putting in place coordinated multisectoral services that respect confidentiality and the safety of women who suffer from gender-based violence.

“In March this year, the United Nations convened the 57th Session of the Commission on the Status of Women (CSW),” noted United Nations Resident Coordinator Claire Van der Vaeren. “It offers global standards on actions to end violence against women, and Cambodia’s efforts are already in line with many of the Commission’s recommendations. The United Nations continues to support the Royal Government and development partners to prevent violence against women and girls, and to address the root causes– gender inequality and discrimination.”

In addition, H.E. Chou Bun Eng, Secretary of State of the Ministry of Interior; Ms. Pok Panha Vichet, Executive Director of Cambodia Women’s Crisis Center; and Ms. Sok Panha, Executive Director of Banteay Srei, participated as well in the event to highlight national responses and challenges to eradicate violence against women and girls in Cambodia