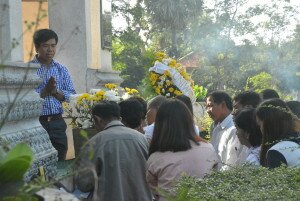 On November 13, 2015, during Testimonial Ceremony of TPO, Khmer Rouge survivors were invited to process their traumatic experiences with a trained counselor during a series of confidential sessions.
Testimonial Therapy (TT) is a short-term treatment for psychological trauma that was specifically develped to improve the coping ability of survivors as well as reduce their posttraumatic stress symtoms after experiencing torture and other forms of organized political violence. The Transcultural Psychosocial Organization Cambodia (TPO) has adopted TT by integrating traditional and religious practices led by Buddhist monks in local pagodas, which in turn, reinforce the power and significance of traditional coping and healing in the country’s spirit-based culture.

TPO, in cooperation with the victoms Support Section of the ECCC (Extraordinary Chambers in the Courts of Cambodia) aims to improve access to legal and psychological services for Civil Parties which is generously funded by GIZ (Gesellschaft für Internationale Zusammenarbeit) and SF (Swiss Foundation).”