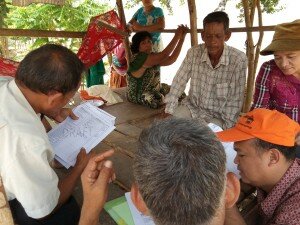 Phnom Penh, Cambodia – There is no room for mistakes when identifying urban poor households. As IDPoor Programme team from the Cambodian Ministry of Planning demonstrated at a March workshop, urban poor household identification requires accuracy in the questions evaluators ask and a reliable scoring system.

Developing the questionaires that determine households’ living conditions was a consultative process, agreed on by the IDPoor urban Consultative Group. Since then, the group has been putting their work to the test. IDPoor testing aims to:

Urban areas in Phnom Penh capital, Banteay Mean Chey, and Kampong Cham provinces were selected to have the urban IDPoor (questionnaire) tested with 45 households, including both poor and non-poor as well as household members with disabilities and chronic/serious illnesses.

The results were presented to the  group to revise and improve the quesitonnaire. The questionaire was then finalized before the pilot began and was an introdution to future urban poor identification procedures.

The IDPoor Programme is supported by the Governments of Australian and Germany and implemented by GIZ.