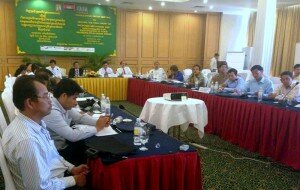 Cambodians, both rich and poor, are moving to the cities. One-in-five call a town or city their home and the urban population growth rate is double that of rural areas (UN data, 2010-15). Social services need to keep up with the population and reach the poor in urban areas just as well as in the countryside.

The IDPoor Programme of the Cambodian Ministry of Planning identifies poor households so that they can access targeted services to help improve their livelihoods. Over the last six months, the Ministry and GIZ have organised a stakeholder consultation process to develop an urban version of the existing IDPoor approach. On 26 March 2015, the IDPoor Urban Consultative Group met to discuss the final draft of the proposed mechanism for urban poverty targeting. The meeting was presided over by H.E. Pan Bunthoeurn, Secretary of State of MOP, with participation from several ministries, NGOs and development partners.

The new procedure envisages using scores for poverty-related household characteristics, such as housing, hygiene, electricity, assets and income. There are supplementary scores added for illness, disability and debt as well as a number of special circumstances to consider when estimating poverty level. IDPoor places great importance on generating results that conform to the local perceptions of poverty. That is why the local community can discuss and amend the draft list of poor households before it is finalised.

Following approval by the Consultative Group, the Ministry of Planning and GIZ will now proceed to field test the urban IDPoor approach in preparation for implementation. The Australian and German Governments are actively supporting the IDPoor Programme in this work through a project implemented by GIZ.