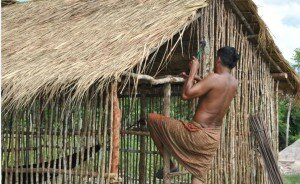 “After receiving training, I had a new desire to raise chickens,” said Yem, an Othom Village land recipient.

In every direction one looks in Othom Village, chicken pens and gardens line the villagers’ houses. Chicken raising is now a priority and new interest for the people of this social land concession village in Kampong Thom, according to a recent agro-ecological assessment and agriculture needs assessment.

At the end of July 2015, 36 villagers – a majority which were women, attended a training on chicken raising practices provided by GIZ’s Livelihood Improvement and Food Security Project, in coordination with Cambodia’s provincial Department of Agriculture.

“Previously I raised 50-60 chickens, but I did not know how to take care of them and protect them from being stolen,” said Yem in a recent interview. “Now after learning chicken raising techniques, I have built stronger pens that will protect my chickens from other animals. I also know how to prepare chicken feed and how to keep them healthy.”

The project provided 10 local chickens to the households that successfully built chicken pens as a result of their training. As an incentive to get others in the village involved, chicken farmers will give 4 new chickens after reproducing (half kg per chicken) to other neighboring households who are new to the chicken raising business.

Presently, there are 35 households with chicken pens. An additional 31 households are waiting for their new chickens.

“My goal is to raise 2,000 chickens. I want to have my chicken raising business at home and then I will focus my seasonal work on the other 1 ha of cashew nuts and 0.5 ha of rice fields on my farm. If I can achieve this, I will no longer need to migrate for work,” said Yem.