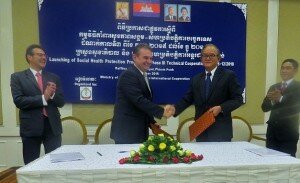 On October 2, 2015, the new Social Health Protection Project (SHP) III was officially launched during a workshop with partners from the Ministry of Health, civil society and project partners at Raffles Hotel Le Royal. The new SHP Project will continue to support the Royal Government of Cambodia from September 2015 until December 2018 in:

The workshop was opened by GIZ Country Director, Mr Adelbert Eberhardt, who stressed health as a key area in the German-Cambodian cooperation. GIZ has been supporting the Royal Government of Cambodia since 1995 in the area of health. H.E Prof. Eng Huot, Secretary of State, of the Ministry of Health opened his speech stating “this joint launching ceremony is an expression of the profound relations between the Cambodian and German people and their Governments, based on mutual friendship, and of our earnest and high-spirited cooperation for the best of the Cambodian people”.

Dr. Bernd Schramm, project director of SHP, provided an overview of the new project, followed by presentations for each output area. The participants discussed the best ways to achieve the presented results of the project. The successful workshop ended with H.E Prof. Eng Huot and Mr Adelbert Eberhardt signing the new implementation agreement for SHP III.