She is happy and proud (both at home and farm): A story of woman in Cambodia shows everyone has the rights to better livelihood 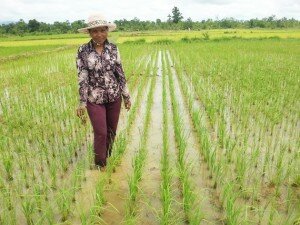 Ms. Him Sothea is an example of the woman who could change her life from nobody to a well-recognized organic rice farmer.

Him Sothea, 49, a mother of three daughters, living in Chum Teavchreng Village, Tang Krous commune, Kampong Chhnang Province. Her older daughter is 21 years old, studying at university in Phnom Penh while the youngest is studying at grade 7 in the community. Ms. Sothea has been working in agricultural farming since she was young. Her parents and so do her grandparents were farmers. After her graduation at grade 6, she married and cultivated rice on one and a half hectares of land in the same way her ancestors had been doing.

“Before joining this project of CEDAC/GIZ, I was too shy to be in meeting. When attending the meeting people did not listen and pay attention to me while I was talking and sharing information. May be they see that I am poor and illiterate,” she said.

Since 2006, Ms. Sothea has participated in the CEDAC (The Cambodian Center for Study and Development in Agriculture) /GIZ (German International Cooperation) project where she could learn more about agriculture technique to improve production, and she was assigned as a leader of an organic rice producer group that requires a lot of time for the participants to be in the meetings, trainings, and various facilitation and monitoring activities while her husband was working at the field.

At that time, her husband was unhappy because a neighbor told him that women should not go out of a house to attend the meeting, or training. They should be at home for cooking and farming. But, this could not stop her from doing her out-of-the-house work.  She started to share what she learnt from the meetings with her husband and it made him gradually understand and let her continue what she was doing.

In her normal days, Ms. Sothea wakes up at 4 am for cooking, doing home gardening, feeding pigs and cows and during rice production seasons doing some field works including ploughing, transplanting, harvesting and threshing on the family’s four hectare of land. During the day time in the production season, she only make time for 30-minute-rest while in the off production season she manages to have one hour rest. Right now, she has four hectares in total for organic agriculture.

From the surplus of family consumption, she makes 2,500 US dollar annually from selling organic rice with 15 percent above the conventional market price.

In the beginning, the villagers did not concern much about health care, sanitation and any input source for agriculture. They spent a lot of money for chemical fertilizer. But today things are getting better,” Ms. Sothea  said.

The source of food for her daily consumption comes mostly from her own farm. From the surplus of family consumption, she makes 2,500 US dollar annually from selling organic rice with 15 percent above the conventional market price. Apart from agriculture, she earn 40 US dollar monthly from her part time job in rolling as a village statistical collector, women and children health and gender promoter at the village.

“In the beginning, the villagers did not concern much about health care, sanitation and any input source for agriculture. They spent a lot of money for chemical fertilizer. But today things are getting better,” she said.

In the family, she is mostly responsible in decision making. Her husband mostly leaves it to her as he does not want to deal with family related matters and only wants to work in the farm.

“My husband does not speak or communicate much with others or even me. He is not very active in farming activities and he drinks wine every day,” she said. 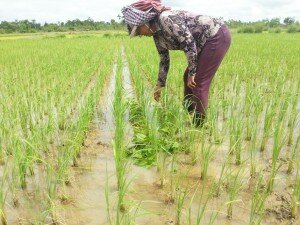 For her future plan, Ms. Sothea wants to scale up the organic production and apply biocontrol agents to her rice farming.

Through her own observation, men in the community do lesser activities associated with the immediate care and maintenance of the households such as children caring. Women are usually concerned with issues relating to family, health, food, child’s study and social work.  In farming, she sees that women have the primary responsibility for the care and maintenance of the rice seed, livestock and home garden.

“I think women benefit directly from the CEDAC/GIZ training and meeting. I think men may see it is not important for them. However, the men are constantly updated about results of the trainings and meetings,” she said.

Ms. Sothea now knows very well about chemical pesticides which pollute water, soil quality, and beneficial insect and human health. She said recently a neighbor farmer in the village died at the field because he was not instructed well to use pesticides against insect crab in rice field. With this reason, she and some other farmers in the village stop using chemical pesticide. Instead, she uses compost, cow dung, field residue and green manure to fertile soil and natural pesticide to against insect.

“The villagers now feel confident on me and trust me on the information.  They have seen that I have changed positively not only in terms of my livelihood, but also in terms of training facilitation, public speaking and social responsibility.”

For her future plan, Ms. Sothea wants to scale up the organic production and apply biocontrol agents in case there is any problem with soil borne and foliar disease in her farm. Ms. Sothea is an example of the woman who could change her life from nobody to be a well recognized organic rice farmer in the community through her activities in transferring the knowledge from the training to other farmers and improve various social contributions.

The training and meeting consists mainly female women participants who are acting as multipliers to transfer their gained knowledge to farmers and other cooperatives. Due to Based on the training, a survey analysis showeds that knowledge of female women farmers increases in terms of production techniques, biological plant protection as well as the usage of pesticides and organic cultivation methods. It also gaives awareness of the effects on the environment such as degradation and water pollution as well as the effects on human’s health by using chemicals and pesticides. The study also showeds that women got empowered through capacity development measures provided by the CEDAC/GIZ project. The acquired knowledge increased the self-confidence and the role of women in the agricultural sector and in society. Besides, the confidence of women increased in terms of public speaking, social responsibility and decision making capacity in family.

The CEDAC/GIZ project in Cambodia promotes organic cultivation among farmers in the country. It trains farmers in implementing biological plant protection based on Trichoderma fungi, a specific form of biological plant protection. In cooperation with the USAID project HARVEST, the aim is to improve the yield in rice and vegetables of a total of 500 smallholder farmers. About 6,000 could be reached indirectly.