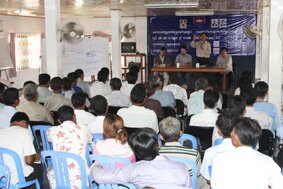 Phnom Penh, Cambodia Production of Cambodian organic rice is rising rapidly as international demand for the product increases, experts said at a forum for growers and other in­dustry members held Tuesday at the Phnom Penh headquarters of agricultural NGO Cedac.

“In the first six months of this year we’ve exported about 200 tons of organic rice, which is about double last year’s figure,” said Cedac president Yang Saing Koma, adding that farmers aren’t producing enough to meet de­mand. “We hope that by next year, we’ll be exporting 1,500 tons annually.”

Although there are about 100,000 farmers who produce organic rice in Cambodia, only about 200 meet international standards, Mr. Saing Koma said.

He said Cedac hopes the number of certified organic farmers will rise to 700 by next year, but certification is a strict, three-year-long process, and farmers who are certified are subject to annual inspections thereafter. 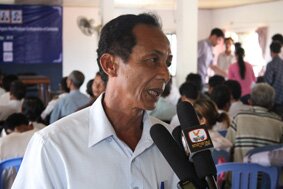 Claudius Bredehoeft, national project coordinator for the regional program ASEAN Biocontrol for sustainable Agrifood Systems of GIZ, the international development arm of the German government, said at the forum that Cambodian farmers are well-positioned to carve out a niche in the rice market. GIZ together with CEDAC is building up the organic rice value chain for the national and international market since 2003. The organic production is preserving the soil fertility on the one  hand and supports the farmer to save the costs for chemical inputs on the other. Through the organic and fair-trade certification and market driven approach the farmers are increasing their income as well.

“Since Thailand has introduced minimum rice prices, and Cambodia can export tax-free to the E.U., it has advantages Thailand and Vietnam do not,” he said. “With the fair trade and organic price premium, there are good market incentives to [continue to grow the rice industry].”

Heum Sothea, a farmer from Kompong Chhnang province and forum participant, said that growing organic rice had improved living conditions for her family.

“When I grew conventional rice, I spent a lot of money on fertilizer and chemicals, and cultivated only 1 to 2 tons per hectare. I sometimes had to sell pigs to pay my debts,” she said.

“But now that I grow organic, I harvest about 3 tons per hectare and sell at higher prices. I can use the profit to send my children to school and buy them plots of their own.”

By: Mech Dara and David Kaner

Copyright by The Cambodia Daily