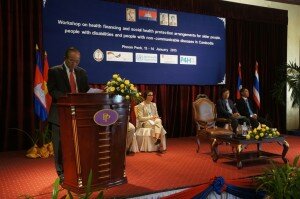 On 13 and 14 January, 2015, the regional workshop on health financing and social health protection arrangements for vulnerable groups such as older persons, persons with disabilities and persons with non-communicable diseases (NCDs) took place at the Phnom Penh Hotel.

It was hosted by the P4H initiative and jointly organized by the World Health Organization (WHO) and the Deutsche Gesellschaft für Internationale Zusammenarbeit (GIZ), in collaboration with the Cambodian Ministry of Health. The event was focused on the lower Mekong sub-region, including Thailand, Vietnam, Laos and Cambodia.

During the workshop, it was recognized that Cambodia has sound policies and strategies for addressing the needs of the concerned population groups. However, it emerged that implementation of these policies is hampered due to:

Suggested approaches to improve the access to health care for vulnerable groups include:

Specific interventions considered helpful for enabling financial access to health care for vulnerable groups, are health equity funds (HEFs) and the IDPoor programme. However, the supply side should be able to render the required services for this access to be effective.

In general, the Cambodian Government is committed to ensuring affordable access to health care for its population. However, the health system has to deal with several challenges such as the increasing number of vulnerable persons, while resources are constrained. The number of persons aged 60 years or more will increase from 1.1 million in 2013 to 2 million in 2030 and there is a considerable overlap between age and NCDs as well as disabilities. Depending on the screening tool, it is estimated that at least 4.3% of the Cambodian population lives with a disability. Based on international experience, the WHO expects this number to be closer to 10 – 15%. As the likelihood of becoming disabled increases with old age, this number is likely to rise.

Vulnerable population groups have higher needs for health care, resulting in a higher chance of catastrophic spending and impoverishing health expenses. Their health spending is considerably higher than of other Cambodians: 3-fold among older persons, 5-fold for persons with disabilities, and 16 times higher for persons with chronic diseases. Moreover, they have limited access to health services. For this reason, there is a need to carefully consider the distribution of available resources in order to increase efficiency and use resources most reasonably.