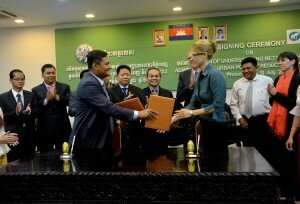 Guided by the motto „Cities have the capability of providing something for everybody, only because and only when they are created by everybody“ GIZ’s  Land Rights Program II and Phnom Penh Capital Hall signed a MoU on July 10. With the technical support of GIZ, Phnom Penh Capital Hall aims to strengthen the capacity of their staff to identify and implement replicable, transparent and participatory procedures to provide land tenure security for urban poor settlers.

During the signing ceremony the Deputy Governor of Phnom Penh Capital, HE Ieng Aunny, presented his goal to stop the development of new urban informal settlements. He underlined the need to improve the situation of urban poor settlers and thus to give them secured tenure rights.

Maraile Görgen, representative of GIZ Land Rights Program II, welcomed the approach and valued the representatives of Phnom Penh Capital Hall for their ambition to fight poverty in the capital. Through the longstanding and successful cooperation with the Municipality of Battambang, GIZ Land Rights Program II became an experienced and valuable stakeholder in the area of securing land tenure for urban poor communities. The LRP II team is more than happy to share its expertise with its new partner in Phnom Penh and is looking forward to bring the capital’s informal settlers to formal land tenure rights.