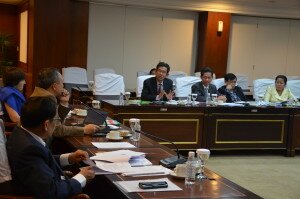 Delegation from Cambodia exchanges experiences on the structure and management of civil service with the Indonesian Ministry of Bureaucracy Reform.

Jakarta, Indonesia––With the wish to learn from the Indonesia’s practical decentralisation experiences, a Cambodian delegation visited Jakarta and West Java Province in March 2015. The delegation was led by H.E. Sak Setha, Secretary of State of the Ministry of Interior, and was interested in various topics that would contribute to their sub-national democratic development reform in Cambodia, including:

The Royal Government of Cambodia has declared the decentralization of key functions, responsibilities and public services from ministries to elected sub-national councils a priority in the present phase of SNDD reform (2015-2017), with the objective to bring public services and decision-making closer to citizens.

With decentralization, it is expected that citizens be able to more easily voice their needs and expectations to local councils and to hold local decision-makers and service providers accountable for their actions. For sub-national councils and service providers, it will be easier to listen to citizens’ voices and to be informed about their needs and demands.

The ministries of health and education, among others, are reviewing their responsibilities in order to identify the functions, which can be decentralised. For councils to be able to perform these functions, they will also receive the necessary financial and personnel resources from central government.

It is against the background of these Cambodian decentralisation reform efforts that the NCDD Secretariat, in cooperation with the GIZ-implemented EU Programme for Strengthening Performance, Accountability and Civic Engagement (EU SPACE) in Cambodia, and the Programme Transforming Administration – Strengthening Innovation (TRANSFORMASI) in Indonesia, facilitated the study visit to Indonesia.

In Indonesia, the Cambodian delegates had the opportunity to exchange with representatives of the TRANSFORMASI counterparts, including:

as well as with

Members of the Cambodian delegation included representatives of the Ministries of Civil Service; Interior; Health; Education, Youth and Sport; Economy and Finance as well as of the Secretariat of the National Committee for Sub-National Democratic Development (NCDD-S), the Association of Capital and Provinces and the National League of Local Councils.