Land Tenure Security for Pu Trom Community in Mondulkiri: An indigenous people community is celebrating the receipt of their collective land title 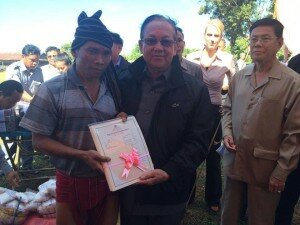 Mondulkiri’s Pu Trom community inhabits 116 families from the ethnic group Bunong. The community jointly owns 1,606ha of land which is split into five different types of land: residential, farming and reserved land for future generations, spiritual forests and burial grounds. The community cultivates and uses the land jointly and preserves it for future generations. With the title in the pocket, Pu Trom’s villagers now got land tenure security. They legally own their land and are officially able to protect it against encroachment and land grabbing. 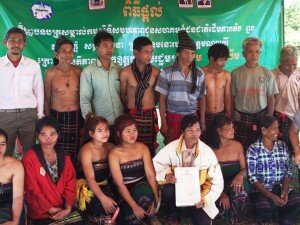 During the ceremony the four speakers H.E. Im Chun Lim, Senior Minister of MLMUPC, H.E. Eng Bunheang, governor of Mondulkiri, Maraile Görgen from GIZ’s Land Rights Program as well as Mr. Royeum Pcheul community chief of Pu Trom highlighted the importance of the land title for Pu Trom community and all other indigenous communities in Cambodia. For indigenous communities land is much more than the basis for development and wealth. It is the identity and culture of the people and the place of their ancestors and following generations.

The four speakers asked the community to carefully protect the land against encroachments and land grabbing. Even though the community legally owns the land, all villagers have to take care of it. The community acknowledged the advantage of formalized land tenure security and agreed with the speakers about the importance of protecting and preserving the land.

Besides having set ‘official’ concrete boundary markers, the villagers of Pu Trom community set their own boundary markers: Traditional hard wood trees which have a special importance to the community. H.E. Senior Minister Im Chun Lim valued this effort and appreciated the tradition and customs of Pu Trom’s villagers who performed Bunong dances and music during the land titling ceremony.