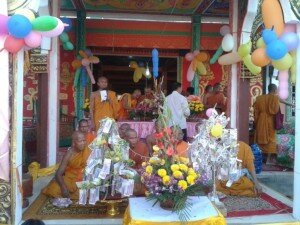 11 February 2016
Preikuy commune, Kampong Svay district, February 2015 – In Kampong Svay, a local initiative has created a new and innovative way to support the poorest and the most vulnerable members of the community: persons with disabilities and older persons. During a money flower ceremony at Bendei pagoda $3,289 were donated by the community to enable those in need to visit a doctor when falling ill. The money was then donated to finance moto dubs, which are contracted, to bring the most vulnerable people from their home to a health centre. This basic service could be a matter of life or death for many that cannot afford the transport to get to health centres. The initiative was jointly started by the local government and religious authorities and facilitated by GIZ.

“The poor have problems taking care of their health in this remote area,” said Venerable Khim Sopherum, Abbot of Vihear Khpos Pagoda.

Venerable Sopherum leads the Pagoda Fund Committee that supports fundraising in 64 pagodas in Kampong Thom province for charitable purposes. It was his idea to conduct the money flower ceremony and donate the money to finance transportation. His aim is to establish closer links between temples and society and to support the poor and vulnerable. 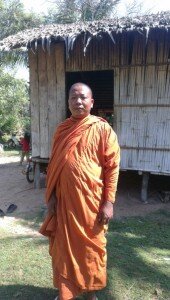 Mutual support within the community and vivid religious values are at heart of his idea:

Getting the Word Out: Dharma Radio

To promote the money flower ceremony, an advertisement was placed on a Dharma radio programme, which is run by monks as well as local radio broadcasts. Additionally, flyers were distributed to all 64 temples supporting the ceremony.

Venerable Samret Naing was very proud that his pagoda hosted the ceremony. He generously provided free breakfast and lunch for monks joining the ceremony as well as water and soft drinks for guests. To attract young people, a theatre group from a local school for teachers performed and a camera man recorded the best moments. During the money flower ceremony 10 monks provided dharma preaching.

“Cooperation between stakeholders has improved”

Strengthening the collaboration between local authorities and pagodas for the greater good is an important aim for GIZ Cambodia’s Social Health Protection Project. In 2014, the project team encouraged pagodas to reactivate the support for transportation and conduct fundraising for this purpose, since the local Health Equity Funds does not cover those costs. Due to financial reasons, it was agreed that only the poorest and vulnerable persons should benefit from this activity. So far, the communes of Meanchey, Kdei Dong and Tbong Krapeu cooperate with pagodas to support transport for persons with disabilities and older persons. It is remarkable that governmental and religious representatives work together.

“GIZ’s Social Health Protection team advises us on affective fundraising,” said Heurn Yinthy, official from Kampong Thom’s Department for Religion and Cults. With project support, daily fundraising has increased and additional activities, such as the money flower ceremony, were conducted.

Additionally, the team provides advice to local authorities on managing and organizing transportation.