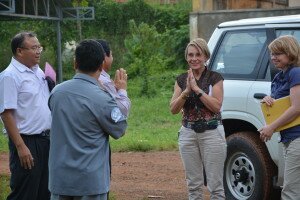 Mondulkiri/Kampong Cham, Cambodia – In preparation for the governmental consultations on October 17, the continued German support to the Land Administration, Management and Distribution Program (LAMDP) was the occasion for an informative joint field visit to Mondulkiri and Kampong Cham provinces. The international delegation comprised the Desk Officer for Cambodia of the German Federal Ministry for Economic Cooperation and Development (BMZ), Ms. Stefanie Ruff, alongside several participants from the German Embassy, the Embassy of Finland, European Union (EU), KfW Development Bank, GIZ Cambodia, FINNMAP, ILO and representatives of local NGOs. The field visit was organized by the Ministry for Land Management, Urban Planning and Construction (MLMUPC), Provincial Authorities from Mondulkiri and Kampong Cham together with Provincial Land Department of Mondulkiri and Kampong Cham and the GIZ Land Rights Program. 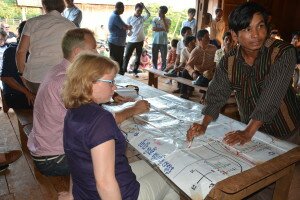 While also introducing into the work of the provincial cadastral offices on systematic land registration, the focus of the first half of the field visit was the support to indigenous people’s (IP) communities land registration in Mondulkiri province. The delegation visited the IP communities in Sre Khtom and Oo’Rona and learned about their experiences and involvement with the process of land registration, which had led to the issuance of collective titles for these communities.

A visit to two indigenous Bou Sra communities highlighted as well the difficulties of IP land registration to the delegation. The IP of the villages in Lmes and Poulu articulated their concern with multiple conflicts pertaining to their land boundaries, while not having received a collective title yet. It became very clear that resolution of conflicts during IP communities land registration is a complicated and lengthy process that needs further support.

The second half of the 3-day field visit, focused on reviewing the situation of land recipients on social land concessions in Kampong Cham province. While still poor, the land recipients showed to the delegation members in which manifold ways they were able to improve their livelihoods. As a side event, a pre-cut of a short film about a photo-documentation by famous war photographer Tim Page was screened in the community hall. The film stars several of the villagers, which squeezed into the community hall, next to the delegation team, to watch themselves and their fellow villagers on the screen.

The topics and lessons learned from the field visit were picked-up again during the governmental consultations and contributed by informing on agreed proposals, e.g. on the further strengthening of the support to IP communities land registration and post-project support to the German-supported land recipients.