From Housewife to Chief in Kampong Thom 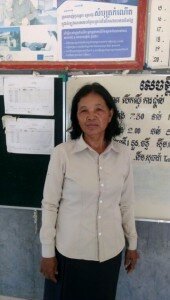 Kampong Thom, July 2015 – Yort Norng was living with her eight children and her husband, a soldier and the village chief of Samrong, Preah Damrei commune in a rural area in Kampong Thom. In 1986, her life drastically changed when her husband died.

Norng is highly motivated to improve the life of the villagers in Samrong village, “I really wanted to help my community,” she said enthusiastically.

Soon after this tragic event, her community chose her as the new village chief of Samrong, as they valued her strong engagement with the community.

Norng continued to serve her village as leader for 26 years before she was elected in 2012 as commune chief for her district in Preah Damer, Kampong Thom. More>>>