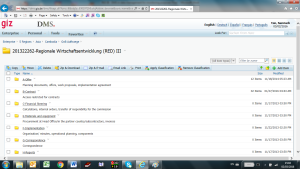 The Regional Economic Development Program III (RED III) is a Cambodian rural development program supported by Gesellschaft für Internationale Zusammenarbeit (GIZ) and the Swiss Agency for Development and Cooperation (SDC). The program is scheduled to last from September 2014 to December 2017. It succeeds the GIZ-supported Regional Economic Development Program – Green Belt that was implemented in the province of Siem Reap from October 2007 until August 2014. More>>>