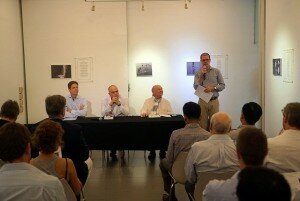 On October 19th, 2016, a first comprehensive book on the work and functioning of the Extraordinary Chambers in the Courts of Cambodia (ECCC) was presented at META House, at an event hosted by the Civil Peace Service program of GIZ Cambodia.
The book presentation began with an introduction by Mr. Nicholas Koumjian, Co-Prosecutor at ECCC and was followed by Mr. Simon Meisenberg, a former CIM/GIZ Advisor to the trial chamber at the ECCC, who is the co-editor of the book. Dr. Ignaz Stegmiller, the second co-editor (was not present) was a former CPS advisor working in the field of ECCC legacy. More>>>