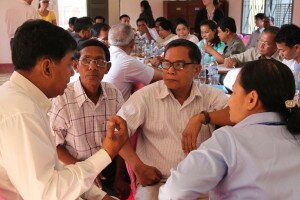 How can councils get closer to citizens? During the exchange visit, councilors from Aek Phnum and Chet Borei district share their best practices.

Kratie and Battambang, CAMBODIA – In May 2014, the first term of district, municipal and provincial councils in Cambodia will come to an end. This is a good opportunity to look back and review the experiences of local government officials over the past five years.

Councillors and representatives of the administration of Chet Borei District of Kratie Province visited councillors of Aek Phnum District, Battambang Province to exchange and learn from one another’s experiences in office. The exchange was jointly facilitated by the Secretariat of the National Committee for Sub-National Democratic Development, Voluntary Services Overseas (VSO) and the GIZ implemented joint European Programme for Strengthening Performance, Accountability and Civic Engagement (EU SPACE).

VSO, an international development charity works with volunteers alongside local organisations that serve the poor. In Cambodia, VSO volunteers work with several districts. EU SPACE is the technical cooperation mechanism of the NCDD-S, European Union, Sweden and Germany and is implemented by GIZ. Its objective is to promote transparent, citizen responsive, accountable and capable councils at the sub-national level.

At the event, district and commune representatives came together, eager to learn how serving as an official representative developed their careers, and changed their lives.

The power of peer-to-peer learning

Since 2011, EU SPACE in cooperation with the NCDD-S have also facilitated exchange between Cambodian and German representatives. Over the past few years, two German municipal councillors have visited their Cambodian peers.

Councillors reflect on the past five years in office

During the visit, district councillors shared their experiences on how their professional and personal lives have changed since they entered office in 2009. 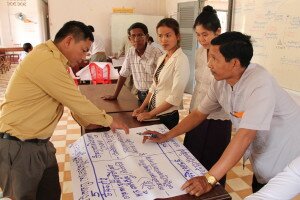 What can be done better during the next mandate? Councilors jointly reflect on experiences and lessons learnt.

The atmosphere during the one-day exchange visit was relaxed and lively. The facilitators of EU SPACE as well as representatives from the two districts made an effort to make everyone comfortable and encouraged discussion from the beginning. Together, the councillors reflected on their roles and responsibilities, on their strengths, weaknesses and challenges. They shared experiences on how to better engage with citizens and civil society organisations; how to implement and disseminate decisions of the council; how to organise the planning process of councils; and how to encourage more equitable gender participation. They highlighted that the relationship between councillors and citizens has improved through the increased engagement of councillors with their local communities.The councillors discussed the impact of their political careers on their personal life. “I am quite popular in my area,” a councillor of Aek Phnum candidly shared. “There is hardly a social event in my district, which I am not invited to.”

The lively discussions between the councillors also exposed the challenges local governments in Cambodia face. The councillors of both districts pointed to unclear responsibilities which hamper their effectiveness; a lack of resources; and the need to build capacity. Further, they mentioned that it remains difficult to promote the participation of citizens in remote areas.

“We will bring back many new ideas applicable to our daily work,” a participant of Chet Borei District pointed out. Participants also recommended that further exchange visits should take place in order to give more district councillors the opportunity to learn from each other.