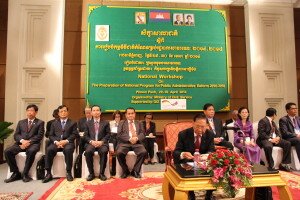 Phnom Penh, Cambodia – Parents seeking a quality public education for their children; citizens requiring an ID card or a marriage certificate; a small entrepreneur wanting to register her business; the victim of petty crime awaiting a police investigation – these people all have one thing in common:  in times of need, they are expecting efficient and effective public services from their government. Yet as everybody in Cambodia knows, this is not always the case. With the aim to provide more effective and efficient public services, the government of Cambodia has pledged to reform its public administration.

To support this process, the newly established Ministry of Civil Service is working to establish a new 5-year National Programme for Administrative Reform 2014-2018.

The Ministry of Civil Service, with the support of German Development Cooperation provided through the “Decentralisation and Administrative Reform Programme” that implemented by GIZ, organised a National Workshop on 29-30 April 2014 to review progress made on public administrative reform. The purpose of the workshop was to consult with more than 300 representatives from ministries and institutions at national and sub-national level on the next stage of the reform.

The Ministry of Civil Service commenced by outlining the three core strategies of the administrative reform: 1) strengthening the quality and delivery of public services; 2) strengthening the management and development of human resources within the Civil Service; and 3) further reforming the compensation regime of civil servants.

Representatives from the Ministry of Health and Ministry of Education, Youth and Sports presented their achievements in improving public service delivery in order to provide participants with insights into effective approaches and practices.

The World Bank and the German Embassy, as development partner representatives, took the opportunity to voice their support for ongoing administrative reform and encouraged the ministry to take a demand-driven approach to implementation in order to engender ownership and ensure that the reforms address ministry priorities and are harmonised with sectoral reforms.

Participants and guests at the National Workshop for Public Administrative Reform 2014-2018, on 29-30 April 2014 held at Intercontinental Hotel.

Participants were then invited to participate in discussion groups on the topics of public service delivery; human resource management; human resource development and remuneration. Facilitated discussions encouraged participants to share current practices and trends; to identify issues and constraints; and to identify priorities for the next phase of administrative reform.

These discussions demonstrated awareness of a growing demand for reform among civil servants that is driven by following points:

In his closing speech, His Excellency Pich Bunthin, the new Minister of Civil Service, stressed that the workshop “created an important public forum to review experience and to identify in-depth actions for public administration reform”. It presented a clear message to all ministries and institutions that they hold ownership and are accountable for effective reform in their sectors, and are therefore responsible for adopting a proactive approach in implementing the National Programme for Administration Reform.

The National Workshop will be followed by a series of targeted workshops to focus on aspects of the reform programme in order to develop a broad base consensus on how best approach its implementation. It is envisaged that the national programme will be finalised in coming months, will focus on early successes to build momentum and commitment while at the same time gradually introducing more fundamental longer term reforms.